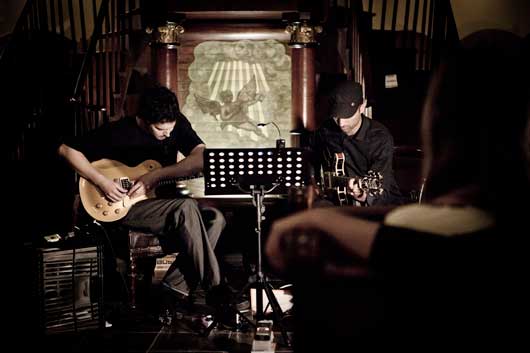 The guitar duo is a recent cross-continental collaboration. Beat and Reza got together while Beat was on an artist residency in South Africa. The guitarists found much in common while also having very different backgrounds. While Beat trained as a jazz guitarist and composer, Reza studied classical guitar and improvisation. Both musicians are equally comfortable playing jazz, avant-garde, rock or bluring the lines between genres. They explore the sonic capabilities of electric guitars with effects in the context of modern classical music or specifically the school related to John Cage.

After initially experimenting with different material, the duo decided to interpret parts of “Microexercises“ (2006) by American composer Christian Wolff. Beat came in contact with Christian Wolff’s music when he played with him in a sextet for a tour in Switzerland. Wolff is part of the experimental New York School, along with fellow composers John Cage, Morton Feldman and Earle Brown. Since this particular work was written for free instrumentation Beat and Reza decided to embark on an interpretation of the composition on two electric guitars.

"Microexercises" were started when the Miniaturist Ensemble asked for a piece with no more than 100 notes in it.  Having enjoyed making one such piece, I went on to make 21 more (and then a second collection, Grete, with an additional 14).  Instrumentation and number of players are mostly open, as are selection of pieces, playing order, clef and transposition readings, and dynamics.

I like the notion of quite long pieces, and, more recently, also quite short ones (these have a history too: Beethoven's Bagatelles, Schumann, Webern, Cage's piano Haiku from the 1950s, Kurtag). I don't worry too much about intensity of focus; it's more about transitoriness and catching what's going by, then letting it go.  And making each piece itself, not like the others, or, if repeated, there is also the possibility of its being different from itself.
Christian Wolff, July 2013

Reza Khota This Johannesburg born guitarist studied classical guitar at Wits University where he graduated with a masters degree. From an early age he has practiced improvisation and listened closely to the recordings of Miles Davis and all those who came into prominence under him. He has played with just about every important jazz musician in South Africa and also on all the major festivals. Reza played in the band Babu who's debut album Up Roots has received wide acclaim. Other projects include the Reza Khota Quartet featuring Buddy Wells, Shane Cooper and Jonno Sweetman. He now resides in Cape Town and plays amongst the cream of the new Jazz scene.
www.rezakhota.com

Beat Keller is a Swiss guitarist and composer. He studied Jazz Guitar at the Hochschule für Musik und Theater Zürich and Composition at the Musikhochschule/Jazzschule Luzern. His current projects include Keller's <10>, a 10-strong ensemble featuring some of the most exciting younger-generation players on the Swiss jazz scene. Their album received “Best Debut Album 2008” (worldwide) from All About Jazz, New York. Concert-activities brought him through Switzerland, across Europe, to the United States and South Africa. He lives in Winterthur, near Zürich. Beat recently spent six-weeks in Cape Town on an "Artist in Residency" programme, made possible by Swiss Arts Council "Pro Helvetia".

Christian Wolff (*1934 Nice, France) is a composer, teacher, and performer. Since 1941 he has lived in the United States. He studied piano with Grete Sultan and composition briefly with John Cage, in whose company, along with Morton Feldman, then David Tudor and Earle Brown, his work found inspiration and encouragement, as it did subsequently from association with Frederic Rzewski and Cornelius Cardew. He has also had a long association with Merce Cunningham and his dance company. As an improviser he has played with the English group AMM, Christian Marclay, Takehisa Kosugi, Keith Rowe, Steve Lacy, Larry Polansky, and Kui Dong. Academically trained as a classicist, he has taught at Harvard, then, from 1971 to 1999, in music, comparative literature, and classics, at Dartmouth College.